Everyday I pass Peaceful Valley Donkey Rescue, but have never stopped. The children’s author Susan Patron has a wonderful burro named Chesterfield in her Lucky novels. I was talking with her about the Donkey Rescue at an SCBWI Writer’s Day and realized that I needed to visit this wonderful place.

The opportunity afforded itself yesterday, when the local facility had an open house in honor of the hundred plus Hawaiian Donkeys that had just been airlifted to California, then trucked to Sand Canyon. They were descendents of donkeys who had worked in the coffee plantations.

The donkeys had a calming effect on me. Maybe it was their soft white noses, the long furry ears, or their gentle demeanor. I immediately wanted to adopt one. My husband was dead set against it, and got a friend of his to try to talk me out of it.

Eventually, I decided it was a bad idea for me. I had no time to take care of a donkey, and I’d have to adopt two because donkeys have special friends from whom they cannot be separated.  That would mean twice the hay, twice the vet bills, and eight hooves to groom.  Apparently, the cost of hay has skyrocketed, like the cost of everything else. And donkeys hate canines. They kill coyotes. I was sure that my dog would be more jealous of the donkeys than she is of the cat. There would probably be a fight to the death and the dog would lose.  On top of that, a donkey’s bray can be loud as a bullhorn, not a pleasant sound in the wee hours of the morning. I know because my neighbors had donkeys.

Still…. I’d really like a donkey! I mean two donkeys. Two soft, cuddly sentient beings, the color of the sand and dust in the canyon, and as calming as ocean waves. Creatures that have helped man with his labors throughout the centuries. Animals that need a home.

The Peaceful Valley Donkey Rescue here in Sand Canyon does a wonderful job with their animals. They even have the equivalent of a nursing home for elderly donkeys. When we rode by their pen on our hayride tour, the old ones were flehming at us, i.e. they lifted their upper lips to get a better whiff, exposing their old chipped teeth. According to our guide, equine teeth grow longer as they age and that’s the origin of the idiom “long in the tooth.” I imagine these donkeys long in the tooth and happy, braying about their life adventures, and enjoying a well-deserved retirement at Peaceful Valley Donkey Rescue.

If you want to learn more about these wonderful animals, adopt two, or donate toward the cost of their care, please go to donkeyrescue.org. 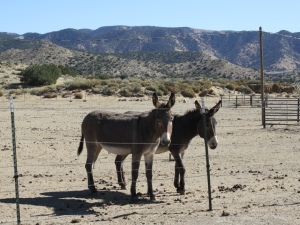 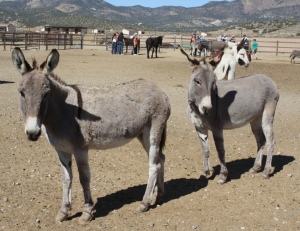 Posted in Uncategorized. Bookmark the permalink.

About C. A. Waldman

I am a writer living in the Southern Sierra region of California, U.S.A.
View all posts by C. A. Waldman »
← Titmouse and Juniper
Winter →