Yesterday was Sand Canyon Road clean-up day. I love walking along our country road picking up trash, especially on a crisp October day. At the beginning of my trash trek gunshots echoed through the canyon from the large group gathered at the gun club, and a fighter jet flew low over the wind turbines. But eventually, those sounds died down, and there was just me, the rabbitbrush, and the occasional pickup zooming by.

I always find some interesting trash, and this time was no exception. Among the empty beer cans and Marlboro packs, was a pair of shoes. New white sport shoes. It looked as if someone had walked right out of them and into the brush.

I’ve always wondered why so many shoes litter the edges of the local freeways and roads. Are shoes not expensive, and also important protection for ones feet? Why would people just chuck them out the window as if they were empty cans?

Many years ago, my husband and I were walking our dog through the canyon along a route we rarely took when we saw a family that had recently moved onto a vacant lot. There they had constructed a crude cabin and hand dug a well. They did not speak English but some foreign language I didn’t recognize. I guessed they were Eastern European, perhaps refugees, the mother and three children all blondes, the grandmother as dark as a gypsy and the father somewhere in between. We stopped to say hello to him as he sat in his muddy SUV reading the bible. He spoke English but was neither friendly nor forthcoming. 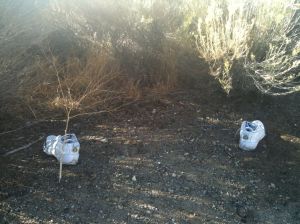 Posted in Uncategorized. Bookmark the permalink.

About C. A. Waldman

I am a writer living in the Southern Sierra region of California, U.S.A.
View all posts by C. A. Waldman »
← Wind Turbines
Mares’ Tails →